Bhubaneswar: Police on Monday arrested two drug peddlers and seized 518 grams of brown sugar, two mobile phones, cash and a four-wheeler from their possession.
Police Commissioner Saumendra Priyadarshi said the Quick Action Team of the Commissionerate Police, with the help of Mancheswar Police, arrested the drug peddlers from High Tech Medical Square.
Priyadarshi said preliminary investigation revealed that both the accused are from Jaleswar area of Balasore district and have been in the illegal business for long. He said both of them were using fish trading as a facade to peddle drugs.

Balasore: The Special Task Force (STF) of Odisha Crime Branch on Saturday seized a huge cache of brown sugar worth Rs 1.36 crore from the ... Read More 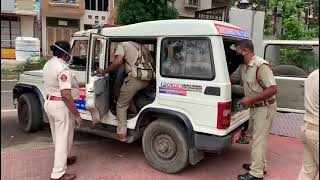