Bhubaneswar: Odisha formally launched the third phase of COVID-19 vaccination for people in the 18-44 age group here on Monday, with beneficiaries being administered the first dose of Covaxin, a Health department official said. The drive is underway at all government hospitals in the State capital.
The third-phase of vaccination is taking place between 8 am and 1 pm, while those above 45 years will receive the shots from 3 pm-6 pm, according to the schedule announced by Bhubaneswar Municipal Corporation.
People who have registered on COWIN, UMANG or Arogya Setu are being administered the jabs. The third phase had a symbolic dry-run on Saturday after the State received 1.5 lakh doses. The civic body has set a target of vaccinating 5 lakh people in Bhubaneswar for which it requires about 10.34 lakh doses.
A large number of young people were seen standing in queues outside government hospitals since morning, braving the scorching sun. The third phase of the inoculation drive, however, could not be taken up outside the State capital due to paucity of doses, another official said. Vaccination is underway in only 256 of the 1,500 session sites in the State.
Director (Family Welfare), Bijay Panigrahi, said immunisation in private hospitals in Bhubaneswar has also been stopped. Panigrahi said Odisha Government has placed orders for 25 lakh doses of Covishield.

The Bhubaneswar Municipal Corporation (BMC) has requested people not to visit the session sites without online registration and booking slots. BMC Commissioner Prem Chandra Chaudhary said a target was set for vaccinating around 11,500 people of whom 6,700 are in the 18-44 age group.
“There was a large gathering of people in all 26 government healthcare facilities in the morning and afternoon sessions of which most of them had come without registering their names online. For some session sites, we had provided 200 doses. But, we found a gathering of about 500 people,” Chaudhary said.
“As the BMC has already announced that there will be no vaccination without registration, the gathering of people at these places without registration is a violation of social distancing norms. Besides, there is a possibility of contracting the virus,” he added. 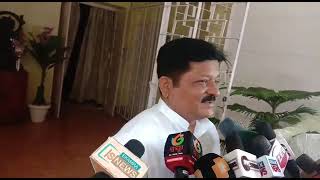 https://youtu.be/EUrR9W7yed8 Bhubaneswar: Bowing to the pressure of the BJP and Congress and the people of the Capital city, Odisha Government on Monday decided to defer ... Read More

Bhubaneswar: More than 70 per cent of the active COVID-19 patients, including ministers and bureaucrats, are undergoing home isolation and treatment in their houses in ... Read More