Fraudster arrested by EOW for duping investor to the tune of Rs 4.80 crore

Bhubaneswar: The Economic Offences Wing (EOW), Bhubaneswar, arrested a fraudster on the charge of cheating a person from Karnataka to the tune of Rs 4.80 crore. The EOW sources said the accused, Alagu Muthu Sankar, from Jeypore was arrested and forwarded to the court of SDJM, Bhubaneswar on Thursday.
Sankar was arrested following a complaint filed by one Jagannath Rao Doddamani of Karnataka for cheating him to the tune of about Rs 4.80 crore and criminal misappropriation of the fund. Investigation revealed that the complainant is working as Senior Research Staffer in a company in South Korea. In 2017, he came across an online advertisement on website www.expatriates.com, floated by one A M Raghunath, for investment in a movie named “Shankara Puram.” Jagganath, being interested, contacted Raghunath, who in course of discussion offered him the proposal for investing in granite business in Odisha. In the process, Raghunath introduced the complainant to his brother Alagu Muthu Sankar, the accused, who allured the complainant to invest in black granite business run by his firm, A M Sankar Granite Industry, at Borrigumma in Koraput district, with the promise of high return.
The complainant invested about Rs 4.80 crore in phases till October 2020 towards the process of applying, granting, investing in several mines of decorative stones, coals and iron ores.
However, till date, he was neither granted any licence nor received any payment/return.
Investigation revealed that accused Sankar with criminal intention to gain the trust of the complainant, had prepared a series of fake letters purportedly issued by several highly placed officers of Odisha Government as well as Government of India, pertaining to Steel and Mines and Forest departments wherein clarifications were sought in connection with allotment/granting of prospective licences of different mines in Odisha in the name of complainant and his wife.
The accused duo also prepared fake bank instruments as well as a false Application for Licence of Mines in the name of complainant and his wife and used those as genuine, whereas the fact remains that no such prospective licence was granted in favour of the complainant or his wife.
The accused has criminally misappropriated the huge amount invested by the complainant, the EOW sources said.

Bhubaneswar: A newborn in Bhubaneswar recovered fully from COVID-19 infection after a tough 10-day battle for life on ventilator, becoming one of the youngest survivors ... Read More 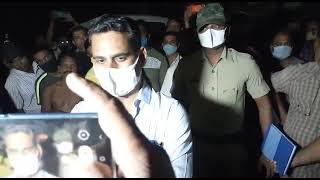 Bhubaneswar: In a move to bring the transgender community into the mainstream and help them in earning their livelihood, the Bhubaneswar Municipal Corporation (BMC) on ... Read More

NEWER NEWSNaveen appeals to people to make it a habit to wear face mask
OLDER NEWSLeakage from masks during breathing likely to trigger Covid transmission: Study