3 elephants mowed down by speeding truck in Keonjhar

Bhubaneswar: Three elephants were killed after being hit by a speeding truck on National Highway 20 in Keonjhar district early on Thursday, a forest official said.
The incident occurred when the elephants were crossing NH-20 near Balijodi under Ghatagaon forest range in Keonjhar district. The iron ore-laden truck hit them while the elephants were crossing the road.
Following the mishap, the vehicle skidded off the road and it has been seized. While two elephants were killed on the spot, another pachyderm succumbed to its injuries a few hours later.
“At around 2 am last night, the mishap occurred when a herd of 10 elephants was crossing the National Highway,” said Santosh Joshi, Divisional Forest Officer (DFO), Keonjhar. 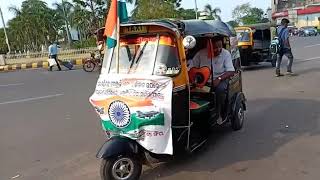 Odisha dedicates a day to remeber martyrs of Pulwama attack

Bhubaneswar, March 1; Capital city of Odisha dedicates one full day to remember our martyrs who lost their lives in the cowardly terroist attack by ... Read More

IIT-B, TISS students come out in support of Jamia, AMU